Terpenes, an important part of cannabis.

Alpha-Pinene , sometimes referred to just as pinene or written α-pinene, is the most abundant terpene in nature. And it’s benefits are many.

Research suggests that alpha-Pinene may have skin and oral health supporting benefits and may support the proper function of the immune and respiratory systems. Oils rich in alpha-Pinene are great for supporting skin health. Helping to keep the skin looking healthy and may help to reduce the appearance of blemishes when applied topically. 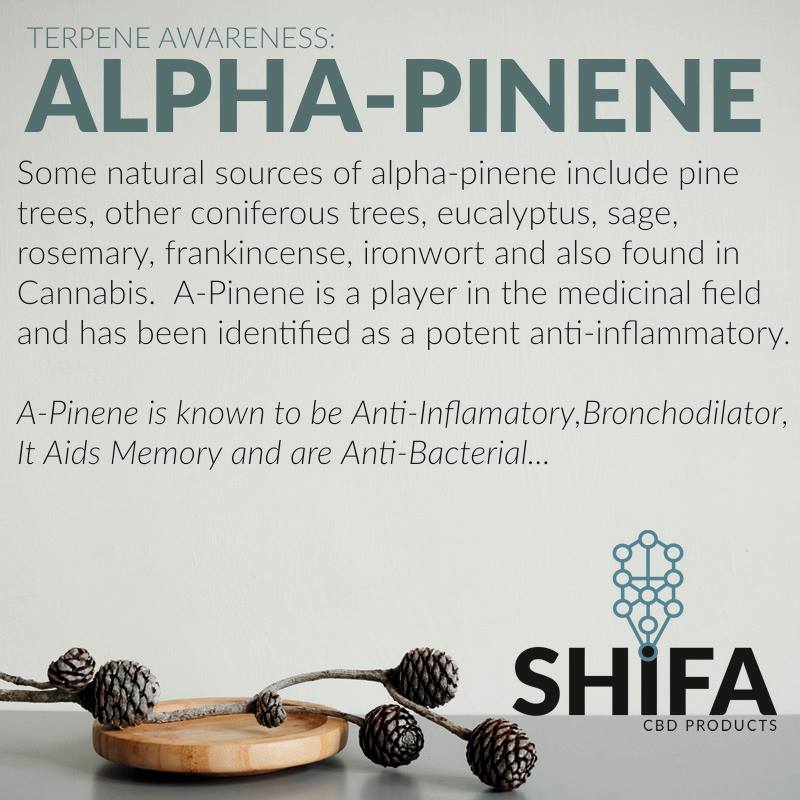 Like its sibling, beta-pinene, alpha-pinene is most famous for its anti-inflammatory benefits.

These are helpful for diseases like arthritis, Crohn’s, and multiple sclerosis.

Alpha-Pinene working togheter with other cannabinoids:

Here are some studies and info for you to read regarding alpha-Pinene:

Gastroprotective effect of alpha-pinene and its correlation with antiulcerogenic activity of essential oils obtained from Hyptis species.

“In summary, we showed that the α-pinene exhibits a significant inhibition of gastric mucosal lesions induced by ethanol, which might be associated, at least in part, with an increase of mucus secretion and reduction of gastric H+ secretion. Further pharmacological studies will be undertaken in order to provide more precise elucidation of the action mechanism involved in this antiulcerogenic activity. Moreover, we observed a straight correlation between gastroprotective effect and concentration of α-pinene present in the essential oils obtained from Hyptis species. Thus, our finding contribute to pharmacological knowledge of α-pinene and researches of new gastroprotective compounds originated from the little-studies species, such as Hyptis species.”

Given that α-pinene blocks G2/M progression and cell growth, we further tested its tumor suppressing ability by using a BEL-7402 xenograft model. Mice bearing tumor xenografts were treated with α-pinene or 5-FU (positive control) when tumors reached a diameter of 3–4 mm. The growth of tumor was then monitored every two days. As compared to control group where mice were treated with isotonic sodium chloride, tumor volume was significantly inhibited in both α-pinene and 5-FU treated groups (Fig. 2B). No mice died in the experimental and positive control groups. Two weeks after treatment, mice were sacrificed and tumors were measured and weighted. The average tumor size in α-pinene-treated group was significantly smaller than that in the control group (229.21 ± 64.77 mm3 vs. 683.07 ± 42.36 mm3, P < 0.01), and comparable to 5-FU treated group (323.883 ± 27.8 mm3). Consistent with this result, the average tumor weight in α-pinene-treated group was significantly lighter than the control (0.253 ± 0.093 g vs. 0.353 ± 0.032 g, P < 0.05), and similar to that in 5-FU treated group (0.353 ± 0.032 g). (Table 1). In consistent to this data, histology examination of xenografts from treated mice showed a lot more dead cells and slow-growing cells in α-pinene treated and 5-FU treated tumors as compared to the control (Fig. 3). Moreover, apoptosis cell death after α-pinene treatment was also evident from the scanning electron microscopy result (Fig. 4). Our results suggest that α-pinene significantly suppresses growth of tumor cells in the tumor-bearing mice.”

Scientists believe terpenes help create a better cannabis experience through a phenomenon called the entourage effect. The entourage effect describes how a combination of two chemical compounds may act together to produce a stronger effect than either compound alone.

Terpenes like alpha-pinene may combine with different cannabinoids like THC and CBD, to produce stronger Cannabis sativa strains and other strains as well. In addition, studies suggest this terp acts as a bronchodilator in humans, increasing airflow to the longs and creating a better bodily experience consuming cannabis.