Alzheimer and cannabis has been talked about for a long time now, since people who smoke regularly seem to almost never get Alzheimer. And lately there have been published more and more studies on the topic. TruthoOnPot is promoting several studies related to Alzheimer and cannabis now, and it seem to be very exiting findings. Also on the topic of cannabis restoring the brain on animals, is really amazing findings and if can be applied to other brain injuries, the possibilities could be endless and an incredible breakthrough in medical history. 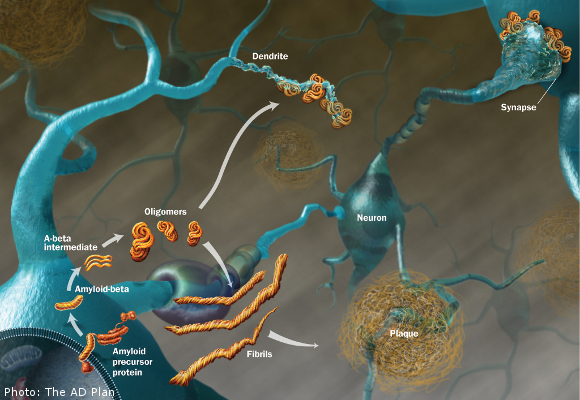 Clumps of protein known as beta-amyloid plaque are a key trait of Alzheimer’s and contribute to the progression and symptoms of the disease. New evidence points to a unique role of marijuana in removing this plaque from the brain.

Researchers at the Roskamp Institute in Florida have shown for the first time how cannabinoids – the active chemicals in marijuana – are able to reduce the build-up of a key indicator of Alzheimer’s disease.

For long, scientists have linked the loss of cell and brain tissue in Alzheimer’s to abnormal structures called beta-amyloid (Aβ) plaque. Levels of plaque in a patient’s brain can even predict the severity of symptoms and tissue damage suffered.

While this study was the first to identify this unique function of cannabinoids, it confirms the results of prior research linking the chemicals to a reduction in both plaque levels and Alzheimer’s symptoms. What’s more, others suggest cannabinoids have a variety of effects that could be helpful in treating the disorder.

“…mice with Alzheimer’s experienced dramatic improvements in memory after treatment with cannabidiol (CBD).”

Alzheimer’s disease continues to be a leading cause of disability among the growing population of seniors. Without a breakthrough in treatment, the number of Alzheimer’s cases are expected to triple over the next 50 years.

We are wet exited to see the future of this research and will keep you posted. You can also follow TruthOnPot for current cannabis news.

Link to the actual study here!

5 Responses to “Alzheimer & Cannabis, could there be a solution?”