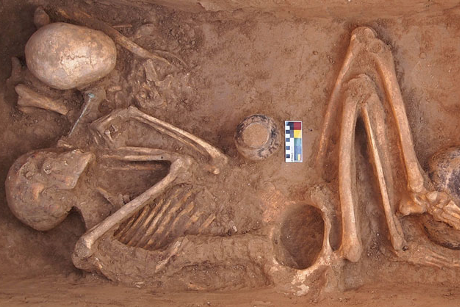 Yet another archeology site shows the use of cannabis in ancient times.  This plant seem to have been widely used all over the world for thousands of years. Our little prohibition era seem to be nothing compare to the actual time it was commonly used. We hope this era of negative propaganda and fear will soon be over an the world can again get back it’s natural healer and connecter to use safe and without fear of prosecution.
This grave was discovered on the shores of the Kunar river in December 2013. In the Pakistani province of Khyber Pakhtunkhwa, this site is one of the oldest ever found in South Asia. According to Professor Muzaffar Kambarzahi of the National Institute of Historical & Cultural Research who is in charge of the team of scientists excavating the site, the various caves composing the settlement would have been inhabited for more than 2500 years during neolithic period. The historian has already elaborated a theory to explain the presence of cannabis on the site:

“According to the location and context in which the cannabis was found, leads us to believe it was used for ritual purposes. It seems that the occupants of the site threw large quantities of leaves, buds and resin in the fireplace situated on the far end of the cave, filling the entire site with psychotropic smoke.”